Anchored on God: Life in the liturgical year

I was working on another post for today, but then decided to do a spontaneous trip to Yaya‘s so I didn’t have a chance to finish it. I went to a beautiful Pentecost Mass at the Holy Rosary Church in Houston today, and the priest’s bright red vestments and the altar banked with colorful flowers on this last day of the Easter season got me thinking about the liturgical year, so I thought I’d re-run this post I wrote a while back on that subject. It was originally published on December 1, 2008. 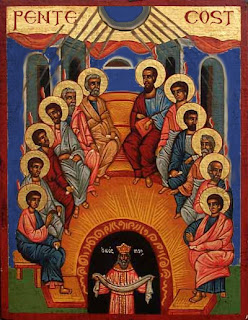 I walked into the church for vigil Mass this weekend and noticed the Advent wreath at the front of the sanctuary. Seeing the four thick glass cylinders with one pink and three purple candles, the priest in his penitential purple robes, the low light in the church from the early winter sunset outside, I had an immediate visceral reaction of knowing where I was in time. It was one of the first times I’ve really felt the rhythm of the liturgical year.

Growing up atheist, the concept of a liturgical year couldn’t have been more foreign to me. We did celebrate Thanksgiving and Christmas as a secular holidays, and the changes of the winter weather provided a certain comforting familiarity, but there was always the underlying sense that it was mostly man-made, optional, and that the cheer of the season depended largely on a family’s circumstances that particular year.

Probably the closest thing I’d ever experienced to the liturgical year was simply the change in seasons, but even that was a surprisingly weak structure. After all, as blogger Darwin recently pointed out, celebrating feasts of bountiful harvests or the arrival of fair weather is nothing more than a symbolic gesture now that we have supermarkets that overflow with a surplus of every variety of food every day of the year. Thanks to air conditioners and heaters, winters and summers no longer impact life on anything other than a surface level. And the rhythm of the seasons can fluctuate drastically depending on where you live; the arrival of Fall when my family lived in Bismarck, North Dakota was a completely different experience than when we lived in Phoenix, Arizona.

It wasn’t until I began exploring Christianity that I realized how much I craved some sort of kind of anchor for my years, and for life in general.

Now that I’ve been going to church for over a couple of years, I’m starting to internalize the ebb and flow of the liturgical year. The sights and sounds and smells of the church Saturday night immediately brought me back to the dark vigil Mass services of this time last year, and my whole body knew what season it was, and what was coming next. I knew without even having to think about it that we were entering a time of penance, reflection, and preparation that would be followed by a season of celebration and feasting.

I used to be surprised at how natural this felt. You’d think that observing the customs of the liturgical year would be something so foreign to me that it would be difficult to get into. Yet as the long season of Ordinary Time draws to a close and the Advent season begins, I see why it feels so right.

First of all, it offers an age-old structure for life that was lost when modern technology allowed us to subvert seasonal changes in weather. But, most importantly, the liturgical seasons order our lives toward God, whom we all crave more deeply than anything else, whether we realize it or not.

Looking back, my life as an atheist seemed so adrift not only because there was no real rhythm to my years, but because it was anchored on something other than God. The liturgical year has felt so natural and has brought with it a deep comfort and peace because, in a way, following its practices is what I was created to do: I was created to know, love and serve God, and the rhythms of the Church seasons help me do that. The candles at Advent, the ashes and sparseness of Lent, the great spreads of food at Christmas, the church packed with blooming flowers at Easter — it all has meaning that goes deeper than anything in this world, pointing to the truths of who God is and who we are in relationship to him. The traditions of the liturgical year provide the most steady, solid anchor that our lives could possibly have, because they are anchored to the only real rock, the only immutable thing that is; they are all anchored on God.