Fear of flying: some tips for Christians 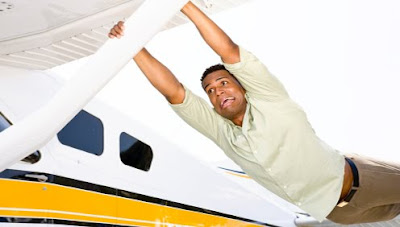 I hate flying. I’m a tall claustrophobic control freak, so the entire concept of being crammed into a small space and barreling through the sky at 500 mph without being able to see where I’m going is just not for me.

I had an opportunity to ponder the not-for-me-ness of it all a couple months ago, when my husband and I were flying back from our trip to El Paso. The plane was filled to capacity, I got stuck in the middle of a row at the back of the plane, and the woman in front of me reclined her seat, which meant that I’d spend the rest of the trip with my knees just under my chin. Then we hit turbulence. Bad turbulence.

Just as I was about to descend into the sort of panic attack that would involve screaming “GET ME OUT OF THIS DEATHTRAP!!!!” while hyperventilating and possibly vomiting, it occurred to me that perhaps I should pray about how to handle this from a Christian perspective — I haven’t done much flying since my conversion, so this was a brand new idea for me. I spent the rest of the flight trying out various ideas, and I thought I’d share a few that worked:

9 Suggestions for Christians with a Fear of Flying

1. Pray for the pilot
To be honest, this one didn’t help me all that much mid-flight, but I do think it would have helped if I’d put a couple minutes into calm, focused prayer for the pilot (in particular for him to have wisdom, courage and steady nerves) before I got on the plane. Not that God cares how or when we pray, but it would have given me more peace of mind when I was on the plane and feeling panicked if I’d put in some quality prayer time for this intention beforehand.

2. Pray for humility
It was interesting to notice that certain aspects of my fear on that flight were connected to pride. The more I dove into a mindset of “littleness, ” the more calm I felt. For example, my brain was INSISTING that it was 100% POSITIVE that this plane was doomed; it was comforting, then, to remind myself that neither I nor anyone else knows what will happen even ten seconds from now, and that it’s truly all up to God.

It also occurred to me that part of my certainty that this particular plane was headed for disaster was rooted in pride and self-centeredness. Despite the infinitesimally small chance of being involved in a major airliner crash (see #4), some part of my subconscious that specializes in egomaniacal absurdity probably flashed through images of the 24/7 news coverage of the accident, my name in the newspaper, the stacks of flowers at the vigil outside the airport gate and thought “that’s the way for me to go.” Next time I’m going to bring a printout of the Litany of Humility to say before and during the flight.

3. Choose an intention for which to “offer up” your suffering
As soon as the first air pocket sent the plane bouncing through the air, I thought of a person who was particularly on my heart, and I formally prayed to unite my suffering with Christ’s for that individual. I’ve written about my understanding of that concept before, and, once again, it did feel like a truly love-generating act to suffer with Christ for someone else’s sake.

4. Know the facts
Speaking of other people, it helped me a lot to remember that there are thousands of other people on airplanes all over the world at this very minute. I thought of this cool Live Flight Tracker website that shows the number of flights in the air at any given time (as of this writing there have been a staggering 44, 905 flights in the past 24 hours!) Even if you knew for sure that some plane somewhere in the world was going down at this minute, the odds are still very low that it would be yours.

5. Recognize fear based on unfamiliarity
I’m sure there are exceptions to this, but I’ve noticed that even people who fear flying tend to get used to it if they do it enough. When my husband and I used to travel once or twice a month I almost never felt scared on planes. My husband once pointed out that we’re land-based mammals; we’re not designed for rapid vertical motion like you experience in a plane. It takes some getting used it. So, for some of us who don’t experience it that often, some caveman part of our brains starts screaming “THIS IS VERY BAD AND WRONG!” at the first bounce of turbulence. It helped me to mentally parse through my fear, identifying how much of it was simply my body having a visceral reaction to the unfamiliar.

6. Pray about why God allowed you to have this fear
Not everyone has a fear of flying. It was surprisingly soothing to meditate on why God might have given me this particular cross, and how he planned to bring good out of it. Maybe it’s about working on my issues with control? Or perhaps I’m supposed to work through it, take what I’ve learned and use it to help others (by, say, posting about it on my blog)? I didn’t get any thunder-and-lightning insights, but it did keep my mind wonderfully occupied, and allowed me to acknowledge my fear while leaving out the bone-chilling terror aspect of it. Unfortunately this line of thought required way too much focus for some of the more scary moments up there at 30, 000 feet, which is why I recommend the next tip…

7. Pray the Rosary (or other similar prayers)

I found the Rosary uniquely helpful for dealing with my airplane panic. First of all, it doesn’t require reading. When we hit choppy air I was able to cling to the rock of memorized prayers, which were tremendously helpful since it was too bouncy to read and the only spontaneous prayer I could come up with was “GAAAAAAAH! GET ME OUT OF HERE!!!” (Which I’m sure God wouldn’t mind, but it wasn’t very comforting for me.)

Second, it was so strengthening to have something to literally hold on to. I wrapped my clammy palms around the tough cord of my twine rosary, which I thought of as being like a rope that tethered me to God. Enacting that symbolic gesture really helped me stay steady in my faith while the irrational part of my brain was freaking out.

Finally, I found indescribable comfort in the mysteries. I’d recently had my epiphany about meditation and the Rosary, and praying about each mystery led me to realize what a unique opportunity I had to relate to a certain aspect of the life of Christ: as I thought about our Lord’s earthly experiences, it occurred to me that for the Creator of the universe to place himself on a planet run by bumbling, simple-minded humans would be like one of us getting on a plane piloted by a drunk dog.

I thought deeply about God’s incredible humility in subjecting himself to human hands, and realized that I could share in some miniscule way in that experience if I would embrace this moment of being out of control, forced to trust in the Father and in the imperfect humans he’d put in charge of my destiny. I prayed the mystery of the Agony in the Garden over and over as the plane lurched ominously in the clouds, feeling a little closer to Christ with every jolt.

8. Trust in grace
At one point during takeoff, the plane started slamming up and down so violently that the other passengers began to gasp and yelp. That is probably the closest I came to having an actual panic attack. The thing that kept me sane — and I’m convinced it’s the only thing that stood between me and an all-out freak-out — was to trust in God’s grace. What I mean by that is that I chose to believe that if this plane were going down, that God would give me the grace to have peace amidst my surface-level fears; and if he didn’t, then it must mean that the plane was going to be fine.

Now. I realize that it’s probably more complicated than that. I’m not sure it’s theologically correct to say that 100% of Christians always feel the palpable peace of Christ in the moments before their deaths. And normally I’d have a great interest in making sure that I don’t believe anything that’s based more on emotion than solid truth. But in this case, I just feel like God and I have a deal that I will feel his peace amidst my animal-level fears if it’s his will that my earthly life end in a plane crash, and I’m going to go with that.

9. Have a glass of wine
I know, this one isn’t for everyone, but I’ll just say that having a glass of wine helps me calm myself when I feel tempted to fashion my jacket into a makeshift parachute, head for the emergency exit and take my chances. (I know friends who don’t drink but have gotten prescriptions for Xanax for a similar purpose.) One day I hope I’ll be able to have such a rich prayer life that I’ll have no need for such worldly crutches. But until then, you can count on seeing me flag the stewardess the first chance I get and ask for a big ol’ glass of cabernet.

I’m happy to report that all of these ideas were actually helpful to me — as I said above, I wrote the draft of this post in mid-flight on that bumpy ride back from El Paso. (Though I can only imagine what the other passengers must have thought to see me crammed into my seat with not enough leg room, clutching a rosary in one hand and a glass of wine in the other.) I almost look forward to the next time I fly so that I can test these ideas out again. Almost.

Anyone else have tips for dealing with a fear of flying?