If I have to have a scorpion in my toilet, I should at least get a blog post out of it

I don’t have much to say about this: 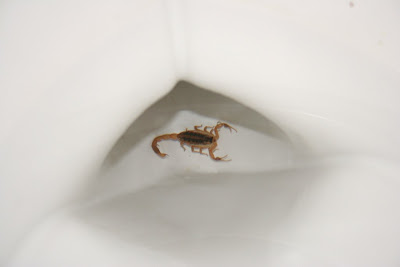 Oh, wait. No, I do. Until I saw the picture to refresh my memory, I had forgotten that my charism is freaking out about scorpions.

[Before I get started, let me apologize to any new readers who may have mistakenly thought this was a classy blog and were not prepared to see a close-up picture of a toilet and a scorpion when they checked for new posts at Conversion Diary today.]

So anyway, I was walking by the hallway bathroom yesterday morning and noticed some object in the bottom of the toilet. In this house it could have been any number of things, none of them good, so I was relatively prepared that my findings were not going to improve my day. I was not, however, prepared for it to be a scorpion.

My first thought was to reflect that Yaya, for whom potty training is a second religion, so effectively whipped everyone into shape around here that even our scorpions use the potty now.

The joking ended abruptly, though, when I realized: it got in there by itself. My husband was out with the kids, and it hadn’t been in there when they left. The most likely route would be that it crawled under the space between the bottom toilet seat and the bowl, i.e. WHERE NO ONE COULD SEE IT. Which means…well, lest I cause Feedburner’s servers to melt down from mass use of the “unsubscribe” button, let me just leave it at this: I was prepared that our family might have to deal with stings on our feet from scorpions hiding in shoes, or on our torsos, backs, arms, legs or faces from scorpions in the bed at night. But there was one thing I had not considered. And the possibility of it is now seared into my brain forever.

That night we went to dinner with my dad and grandfather, and I knew that this wasn’t going to be an impromptu support group. I’ve mentioned before my Texan relatives and I just cannot seem to get on the same page about scorpions. As I said in this post, when I would shriek about the very real possibility of being stung in bed while sleeping, my relatives would think that the problem was simply that I couldn’t figure out what to do in case of a nocturnal scorpion attack (“you just brush them off”) or that I was concerned only about the toxicity level of the sting (“it’s not like they’re rattlesnakes…though I did see one the other day…”) But they did try.

When I recounted the story to my dad, he nodded like I was telling him that I went to the store to get some milk. Then he remembered that I had that hang-up abut scorpions, and dutifully put a very kind and sympathetic look on his face. You could just see his mind in overdrive to think through all the angles to try to figure out what bothered me about this. You could tell he wanted to comfort me with some fatherly advice. So finally he offered: “They’re no worse than tarantula bites.”

I just kind of stared at him, wondering if there’s an official repository of Most Epic Encouragement Fails to which I could submit that statement.

He tried again: “Remember that time I woke up to that scorpion stinging me on the knee? “

“Yeah…” I said, eagerly waiting to hear the part about how it didn’t hurt or the sting ended up giving him superpowers or something.

“I didn’t die, ” he said. Sensing that that might not have caused my quirky phobia to instantly dissipate once and for all, he tried another angle: “Plus, it’s not like that time Uncle Benton had one fall off the ceiling and sting him on the face while he was sleeping, ” he added, pointing to the bedroom about five yards away from where I was sitting, where my uncle had been staying when he was stung. “His eye sure did swell up!”

And to think, if I had been in my dad’s situation of waking to a scorpion attacking my knee, I might have thought my glass was half empty! It was nice to have that little helping of Chicken Soup for the Texan Soul to inspire me for the rest of the evening, especially as I was falling asleep.

I mentioned it on Twitter, of course. This is one of those times that people who follow me on Twitter get a payoff for all the inane and boring tweets they put up with. It’ll be weeks of “I’m tired, ” and “I stayed up too late, ” and “Why do I stay up so late?”, and then, boom! “SCORPION IN MY TOILET!!!!!!”

Luckily the Twitterati had my back, and I got some advice for how to handle this all with prayer and grace. The guys at Creative Minority Report were able to offer me encouragement from a Catholic perspective:

And Scoutsigns weighed in with some practical suggestions:

Scoutsigns pointed out in another tweet that it was probably still alive — scorpions have been known to live for more than a day under water. OF COURSE IT WAS STILL ALIVE. I have no idea why I thought a mere few hours submerged under water would mean it was dead. Since I keep having to learn this lesson over and over again, I guess I need to make a flowchart to put on the living room wall to review in case of a scorpion sighting:

Anyway, I hope you’re all enjoying your Memorial Day. If you’re not, you can always remember that at least you didn’t just find a scorpion in your toilet.