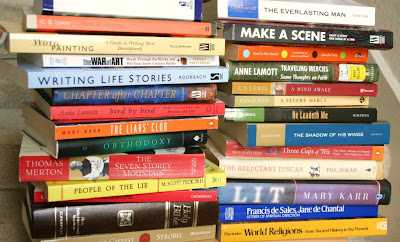 After two years, 600 pages, and 200, 000 words, I think I’m finally close to having a completed draft of my book. (Lest it sound like I confused my story with War and Peace, that’s the the total pages of the first draft, this draft, and some epic outlining exercises in between.)

A quick review for those of you who aren’t familiar with the saga:

In 2008 I signed a contract with the Ted Weinstein Literary Agency to write a memoir about how I grew up atheist and ended up Christian. An unexpected pregnancy derailed the entire process, which caused me some mild consternation (read: I whined and cried like a child who’d had her candy taken away) but I ended up clueing in that God’s plans just might be better than mine. Not only did I have a precious baby girl in early 2009, but the extra time I had thanks to the delays gave me just enough space to realize that the draft was no good. It read like…well, like it was written by someone who had never written a book before. It was strained. It was humorless. It was layerless. I was trying too hard. I scrapped the whole thing, devoured approximately two gazillion books about how to write books, sought expert advice, committed to care more about whether it’d be fun to read than whether it’d impress critics, and I started over. (And yeah, that first day I sat down in front of a blank Word document after a tossing out a year’s worth of hard work, my first thought was something like, “Dude. Seriously?”)

And now I’m finally in the home stretch of the writing process. It’ll be a huge milestone to have this new draft under my belt, even though there will still be lots of editing and revision to do later. I don’t have a hard deadline with my agent, but I’m shooting to have it done by Sunday June 20, the feast of Margaret Ebner.

Other than popping in on Fridays I probably won’t be blogging much these next couple weeks as I work to wrap up this draft. If you have a moment to say a prayer for my little project, I’d appreciate it!

So what do you have going on this summer? Cool vacations? Ambitious gardening projects? Home improvement extravaganzas? I’d love to hear about it! (In as much detail as possible. Seriously. I’m going to be spending all my free time chained to my desk for the next two weeks, so I’d truly be fascinated to hear all about what’s up with you this summer!)