The saints can hear the soundtrack 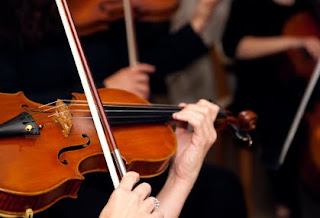 The other day I was out for a jog, and the stunning song Now We Are Free from the Gladiator soundtrack came on my iPod (you can listen to it on Youtube here). I was so moved by the music, I slowed to a walk to focus it.

It was interesting how my perceptions of my neighborhood changed when I watched them with a soundtrack, so to speak. On my way out I’d seen a woman watering the plants in her front yard; I thought nothing of it. Now, on the way back, with the music playing, it seemed so heroic that she was creating something beautiful for God and her family by so carefully tending to her marigolds and daylilies. The entire scene suddenly seemed like something out of a sweeping epic.

I chuckled at myself for being so melodramatic — I mean, it’s just a woman holding a hose. But as I walked on, seeing my neighborhood through an entirely different lens with the horns and violins swelling in the background, it occurred to me that I was probably seeing things more as they really were. What’s closer to reality: that my neighbor’s front-yard tableau was an unremarkable moment, with nothing extraordinary happening? Or that this I was catching a glimpse of the story of one soul, precious to God, in the middle of her own great life drama that had undoubtedly already involved dreams and disappointments, love and loss, fulfillment and yearning?

I thought that this must be how the saints see our lives when they look down on us from heaven: they see all events against as if playing out against the backdrop of a great soundtrack. They understand the eternal significant of even the most simple things; they know that it’s a victory of epic proportions when a housewife chooses not to yell at her kids when she feels frustrated, or when an elderly lady devotes an hour to prayer instead of watching TV. The same goes for saintly people on earth: right now I see a man walking his dog down the street through the window of my office. To me, it seems like nothing interesting; just a dude and his dog. But I think that if a living saint were to see that same scene, she would feel a tinge of awe to recognize that she was witnessing a snippet of the epic saga of one human life, unfolding before her eyes.

A while back I mentioned that I realized that seeing my life as mundane, my daily actions as unimportant, was creating a surprisingly big block in my spiritual life. In the past few days since that walk with my iPod, whenever I find myself approaching my life and the world around me with a ho-hum attitude, I remind myself to take a step back, and see it all like I would see it with the soundtrack.