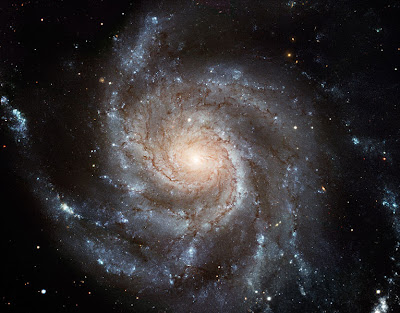 I’ve mentioned before that one of the big questions that gave me pause when I was first coming to belief was: “What about all this other stuff?” Meaning, if what goes on here in earth is of such dire importance to God, if mankind has such a huge role to play in all of creation, then what’s up with all these other stars and planets? It is estimated that there are billions of other galaxies, each of them containing billions of stars and planets. Right now there are thousands of trillions of storms raging on distant planets; there are grand mountain ranges, stunning deserts, breathtaking sunsets occurring all over the universe every day, none of which anyone will ever see. “If there’s a God who’s so focused on what goes on here on earth, why bother with all of that?” I would wonder.

Sometimes I would hear former believers say that one of the facts that chipped away at their belief in God was the sheer size of the universe. The Bible tells us that mankind is important — so important that God himself became man and was tortured to death for us — and yet look at how utterly miniscule we are by both chronological and spatial measures. The lifespan of all of humanity won’t even register as a blip on the timeline of the 15-billion-year-old universe, and we’re so small physically that we’re practically invisible compared to the universe around us. Though this line of thinking never bothered my husband (as he noted when he announced his ability to demolish any star on Jeopardy), it kind of made sense to me. If there’s a God who made us and who deems us to be rather important in the grand scheme of things, why are we so freaking small?

This is one of those issues that has made more and more sense the more I grow in my understand of God, and of our relationship to him.

Back when I first pondered this question, I hadn’t put a ton of thought into what, exactly, God is. I spent plenty of time investigating evidence for his existence, but hadn’t really pondered what and who he is. Even when I finally began to think more about what he’s like, I focused more on how I as a human could have a “personal relationship” with him, thinking mostly about his accessible, human qualities that we know from when he walked here on earth. But the more I read the works of the great Christian thinkers of history, however, the more I began to see that I needed to be careful not to make the mistake of thinking that I fully — or even partially — understood God. I began to gain a better understanding of the order of creation and our place in it: that we as humans are incredibly valuable since we are loved by God, created in his image; yet we fall so far short of his infinite goodness and glory that it’s not even funny. We are special; yet we are small.

Given this more clear understanding of God and our relationship to him, the structure of the universe began to make sense — perfect sense. From looking at the material world alone, we know that we are wonderfully unique, probably the only sentient life in the universe; yet we are also small — very, very small — and the wonders of the universe around us are infinite, far beyond anything that our limited intellects could ever grasp. And so it is with God.

I’ve been thinking about this topic a lot for the past couple of weeks as I’ve gone through my days, and then I heard this during the readings at Mass this weekend:

As high as the heavens are above the earth,
so high are my ways above your ways
and my thoughts above your thoughts. (Is 55:9)

It’s a beautiful plan, when you think about it. The smarter and more clever we get, the more we can know about the universe above us. Yet the more we study and measure and chart the heavens, the more we realize how incredibly tiny we are, how very much there is that we will never, ever know. We get a glimpse of the reality that the sum total of human learning will never even scratch the surface of what there is to know.

When I first thought of this subject I thought that the Christian story would make most sense if the geocentric worldview had been true, if the only thing that existed in the whole universe were the earth and a sun and moon and some simple stars to revolve around it. But now I realize that the design of the universe, with its infinite intricacy, beauty and complexity, is in fact a perfect reflection of its Creator.