The most powerful woman in the world

This is my new friend, Sister Joeine Darrington, whom I met during the couple of days we stayed with the Benedictine Sisters: 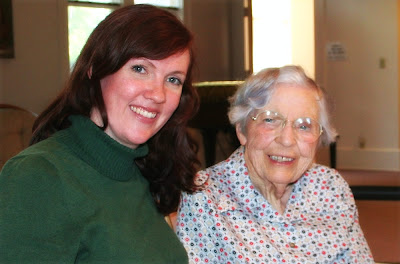 She came over and sat with us during our meals with the sisters, and it was so much fun to chat with her. She’s 96 years old and has been a Benedictine Sister for around 75 years! We talked about how religious life has changed over the decades, what it was like after the sisters stopped wearing habits in the 1960’s, and all about the work they do with the elderly and the homeless. I was touched when she told me that she’d just finished writing thank-you notes to her doctor and dentist. “I was worried that they get complaints more than encouragement, and wanted to tell them how much I appreciate what they do, ” she explained.

We spent a long time talking, but one thing she said stood out to me more than anything else:

She mentioned that each morning before she goes into the chapel, she carefully reads every single new prayer request, and then she prays for them at Mass and throughout the day. The sisters have a large book lying open in one of their main halls; it looks like a guest registry, but it’s actually a log for prayer requests. All the sisters pray for these intentions, but Sister Joeine emphasized how seriously she takes them. She spoke of her dedication to those prayers the way an investment banker might speak of his work on a multi-million-dollar corporate merger.

Her tone had been light and jovial, but she turned serious when she talked about prayer. “You know, prayer is very important, ” she said.

Though Sister Joeine is in excellent health, as a nonagenarian she has had to slow down a bit. She mentioned that she doesn’t do as much work as she used to do, she can’t move quite as quickly as she used to, and I noticed that she uses a walker to get around. But when I considered how much time she is now able to devote to prayer, it suddenly occurred to me: This is a very powerful woman!

Especially after I set aside the first part of an afternoon solely to pray for your intentions in the chapel at Mt. Angel Abbey, I believe more than ever that there’s something special about focused prayer time. I know that the “prayers of the trenches” offered up in the chaos of daily life are great too for those of us who don’t have lots of time for silence, but it is a unique gift to be able to pour all of your love and attention into one prayer for one specific person.

I thought of all the times that other people’s prayers have impacted my own life (some examples here, here and here), and I was awed by what Sister Joeine does every day. Bill Gates and Warren Buffet could have pulled up chairs next to me, and I would have thought, “Wow! I can’t believe I’m hanging out with someone as powerful and influential as Sister Joeine!”

It’s funny how my perspective has changed since my conversion. In my old view I would have still seen my new friend as charming, witty, intelligent and an overall lovely person — but “powerful” is probably not a word that would have come to mind. Yet now that I am aware of the economy of love, where one person close to God really can change the world, I realize that my 96-year-old friend is a one-woman army; in fact, she’s one of the most powerful people I’ve ever met.