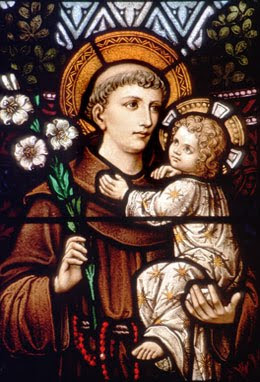 My mother-in-law, Yaya, is Baptist. Well, currently she attends Joel Osteen’s church, but the official denomination that she would claim to be a part of (and in which she raised my husband) is the Southern Baptist church.

Friends sometimes ask if there’s been any tension between us and Yaya since my husband and I converted to Catholicism in 2007, but there really hasn’t been. Occasionally my husband will try to start a good-natured debate with her about doctrinal differences, but she’s never interested: “I love Jesus and y’all love Jesus and Jesus loves us and that’s all I really need to know, ” she once said.

Like in every other area of life, the details of Christian doctrine are of little importance to her — in fact, I’m not sure if she notices them at all. She is so intensely focused on the big picture that she doesn’t have time to mess around with the small things. (For example, when she unloads the dishwasher when she’s visiting our house, she takes the silverware basket and just dumps the whole thing into the drawer. “I’m not gonna sit there and sort knives and forks when I’ve got grandchildren I could be hugging and kissing!” she says.)

Nevertheless, as a gesture of respect, I rarely bring up the areas of Christian doctrine where Baptists and Catholics differ. In general, I figure there’s no need to wade into controversial territory and risk causing tension between us.

But then Yaya lost some important paperwork. And I decided to tell her about St. Anthony.

My phone rang one afternoon, and as soon as I said “hello?” I heard Yaya’s voice shouting, “I DON’T KNOW WHAT I’M GOING TO DO I’VE LOOKED EVERYWHERE FOR THIS STUPID THING AND IT’S JUST LOST AND IT’S DRIVING ME CRAZY!” She eventually calmed down enough to explain that she’d been helping an elderly friend who’d been caught up in a scam, and she’d borrowed some critical documents to contact state officials on his behalf. Now they were lost, and her friend desperately needed them.

I wasn’t sure how she’d react to this, but I decided to risk it: “Have you ever heard of the St. Anthony prayer?” I asked.

She said she hadn’t. I proceeded to tell her about the Catholic tradition (with a lower-case “t”) that Anthony of Padua prays for people who have lost items. I recounted some c-r-a-z-y moments I’ve had after saying the St. Anthony prayer, including the time my husband’s cell phone had been lost for a week. We’d turned the house upside down and had finally given up, though a new phone wasn’t in the budget. I was thinking about it in RCIA class one night, and asked St. Anthony to pray that it turned up. Not five minutes later my phone rang. I didn’t answer it since I was in class, but later I heard the voicemail from my mom telling me that the kids just found the cell phone. I have countless St. Anthony stories like that.

“That’s what I need! How do I do that prayer?” Yaya asked.

Surprised at what an easy sell it was, I told her the words to the simple prayer:

I started to include some caveats about how we’re just asking another human to pray for us, that it’s not a magic spell or anything like that, but she cut me off and said she had to go say that prayer. She called back that night, ecstatic: she’d found the papers. Yaya was officially sold on the St. Anthony prayer. 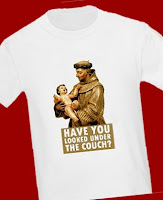 Since this was obviously going to become a key devotion for her, I thought I’d take the opportunity for a little catechesis on the doctrine of the Communion of Saints. “Now, Yaya, I want to clarify that Catholics do not believe that saints have any power of their own, ” I began. “We believe that they’re just regular people who are ‘alive in Christ’ in heaven and can pray to the Lord for us.”

“I am so excited that St. Anthony found that paperwork for me!” she shouted, and I heard the shuffling of papers in the background. I wasn’t sure if she heard what I’d said.

“You know, in the second century a bunch of prominent Christian writers talked about this belief. Origen of Alexandria wrote about how saints who have ‘fallen asleep in Christ’ pray for those of us still on earth…”

“I was so angry I was fixin’ to slap someone if I didn’t find those papers! But that St. Anthony sure did come through. I’m going to pray to him more often!”

“Ah, yes, well, I hope you understand that when we talk about ‘praying to’ saints, we’re using the word ‘pray’ there as shorthand for ‘communicating, ‘ different than when we pray to Jesus, which is an act of worship. We only ask the saints for their prayers, no different than when you asked your friend Ethel to pray that you found the documents.”

The response was more ebullient commentary over the sounds of scattering papers, so I said I’d just email her some additional info about this doctrine.

I figured she must have read what I sent her, or perhaps absorbed my erudite theological explanations, because we heard a lot about St. Anthony in the ensuing months. When she lost her safe deposit box key, she called my husband in a panic.

“I need you to pray to St. Anthony! I can’t find this thing anywhere!” she said.

“Sure, I’ll ask him to pray for us, ” he said, thinking that that would be the end of it.

She paused, waiting for him to start. “Do it now, ” she said.

“Oh, umm. Okay.” He cleared his throat and said, “St. Anthony, St. Anthony, please come around. Something is lost and can’t be found.”

And my husband repeated the prayer, this time replacing “something” with “a safe deposit box key.” Yaya found the key the next day, once again giving thanks to her buddy St. Anthony.

I was delighted with this opportunity for interdenominational dialogue, perhaps feeling a bit satisfied with myself that I’d offered such a rock-solid defense of the Communion of Saints that even my Baptist mother-in-law was convinced.

Then, the other day, I got another frantic call. This time she was so frustrated she could hardly speak because she’d lost her driver’s license and needed it to register for something. It’d been gone for a few days. She couldn’t find it anywhere. “Did you say a prayer to St. Anthony?” I asked. I’d obviously explained this teaching so well that I could relax my terminology, so I’d begun using the shorthand phrasing of “praying to” saints rather than the full articulation that we are simply asking the saints for their prayers.

“Jennifer, I’ve tried everything!” she said over the sound of slamming drawers and crashing boxes. “I prayed to Jesus, I prayed to St. Anthony — hell, I asked Jesus to say a prayer to St. Anthony!”

Looks like we may have a ways to go on this one.

Image from this t-shirt at Cafepress.