The God who becomes dust 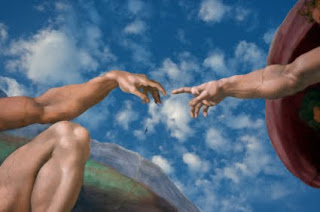 I made an early-morning holy hour a couple weeks ago. The stars were still out when I pulled into the Adoration chapel’s parking lot, but the first row was almost full; there was only one space left.

When I walked into the entry hall I was deeply moved, as I always am, to see that the sign-in registry was full all through the night. The Lord is never left alone; weekends, weekdays, holidays, the middle of the night during a bad storm — someone is always there with him. Each hour has at least one committed “adorer” in addition to any visitors who stop in, and then there are coordinators who are on call 24/7 to fill in at the last minute in case the scheduled person can’t make it. I glanced at the logs from 1:00 AM, 2:00 AM, 3:00 AM and noticed that sometimes there were two or even three people there.

There were about eight other people in the warmly-lit room with me that morning. It was silent, and a I could smell the fresh flowers that people had brought in. As I prayed, I couldn’t help but notice everyone’s gestures of respect to the Lord in the Eucharist: each person bowed before sitting or exiting, many people getting down on both knees. Some touched their faces to the floor. Nobody turned their back on the Lord. Per the standard Adoration chapel etiquette, we would each walk backward to get to the door when we left.

I’ve often written about the tremendous love I almost always see and feel in Eucharistic Adoration. As I settled into a row of seats in the chapel, kneeling to say a mind-clearing opening prayer, I sensed it once again. I gazed up at the consecrated Host and began to pray, thinking that I’d never felt more palpable peace and joy in a place in my life.

And then, as usual, my overly-analytical brain ruined the moment. Instead of the lovely introductory prayer of thanksgiving I’d planned to say, I said instead:

I can’t believe I believe this.

I thought of the people around me, and all the people I’d run into in Adoration chapels over the years: successful business executives, brilliant engineers, people with little education but razor-sharp street smarts, and I thought:

It is, after all, a pretty outrageous claim: God takes the form of bread? We’re all here because we believe that what looks like a wafer up there is actually God?

When I first heard that Catholics still maintain the ancient teaching that the consecrated Communion wafer is literally the Body and Blood of Christ — that the bread ceases to exist and only God himself remains — I thought: “Dude. Seriously?” As I’ve said before, it seemed impossible that a lifelong atheist could ever believe such a doctrine. Is there a modern religion that has made a more outrageous claim?

Long story short, I found all the theological reasoning behind it to be impeccable (a quick summary of all that stuff is here for those who are interested). And then, once I began receiving the Eucharist every Sunday, my doubt was washed away. In the past few years, I’ve had few moments where I wasn’t intimately aware of the Lord’s presence in the consecrated Host.

But this was one of them.

As I knelt there in the Adoration chapel that morning, I had this visceral reaction of finding it all so hard to believe. As a wise philosopher once said: “Dude. Seriously?”

Again, doctrinally I never had a problem with it. My resistance was just this visceral reaction of feeling like it would be somehow disrespectful to accept that God Almighty, the Lord of all, the Force behind creation, would deign to take the form of a wafer! It’s almost too much to believe that GOD becomes BREAD, I thought as I looked at the monstrance.

Then, out of the blue, a thought popped into my mind:

But you believe he became dust?

I don’t know where that came from. I can’t say with certainty whether it was an answer from on high or just my subconscious, but, wherever it was from, it struck me like lightning. I let the words sink in, and the more I considered them, the more I understood the root of my resistance to this doctrine: arrogance.

Since my conversion, I’d never questioned that God became human. That seemed reasonable enough. Because, you know, I’m human, and I’m pretty important and valuable (the thinking went). But that whole looking-like-bread thing? Outrageous.

Basically, I had a scale in mind that looked something like this:

But those words — You believe he became dust? — shocked me into realizing that my scale was ridiculously off. As I was reminded six months ago at Ash Wednesday Mass: “You are dust, and unto dust you shall return.” We humans are infinitely valuable, but only because we were created by God, in his image. Without his life in us, our future is dust — literally. Without him, we would not exist at all.

Rather than whatever prayers I’d planned to say, I let my mind wander to spend some time thinking about who and what, exactly, God is. I thought of this mind-boggling video that hits home the unfathomable enormity of his creation. I thought of the universe’s time scales, on which the entire life of planet Earth is nothing more than a blip on the radar screen, and all of human history not even that. And suddenly that scale looked a whole lot different. After about fifteen minutes contemplating the Creator, it looked more like this:

I looked back up at the monstrance, and it all fell into place. The fact that God becomes what appears to be bread is shocking; but it’s no more shocking than that he first became dust.