Interview with an exorcist, Part I 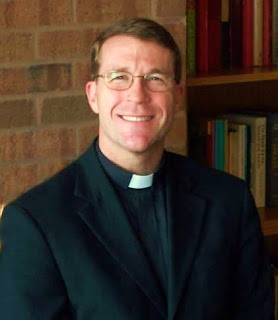 I finally got a chance to catch up with Fr. Thomas Euteneuer and chat with him about exorcism and his new book, Exorcism and the Church Militant. Almost all of the questions were suggested by readers in the comments and emails I received in response to this post. I hope you enjoy hearing his answers as much as I did!

Q: As I read your book, my impression was that exorcism is essentially a form of prayer. Is that right?

Q: Some people hear about exorcisms and ask: Why is a priest and all the ritual necessary? Why can’t a person just have his friends pray for him, or pray to cast out the demons himself?

It is correct that people can pray spontaneously against the power of evil. What the Church reserves to itself are the worst cases; in these worst cases you need a liturgical form of public prayer and a consecrated professional whose work is spiritual warfare. When you’re dealing with a very bad guy (a strong demon), you don’t just politely invite him to leave. That’s not going to work. The liturgical form of prayer has great power because it is a common prayer, the prayer of the Church — not just an individual or group prayer. In it, the Church commands the demon to leave. It is backed up by the apostolic authority of the bishop, delegated to the Church from Christ himself.

Q: In another interview you made the comment that “the power of the ritual is based on the faith you bring to it.” Could you elaborate on that statement?

The ritual itself, because it is the Church’s ritual, has the Church’s faith behind it. Even if the exorcist didn’t believe in its power, it somehow would be effective because of the faith of the Church. Having said that, if a person brings his own faith to the ritual and believes in the authority of Christ, it adds an incredible amount of power for expelling a demon.

Q: One thing that is clear from your book is the power of the name of Jesus and how much it torments demons. Is this a word that they can say (e.g. in a disrespectful way), or is in unpronouncable to them? Does the name torment them in and of itself, or only when said respectfully by believers?

The sacred and holy Name of Jesus is “the Name to which every knee must bend in the heavens, on the earth and under the earth” (Phil 2:10-11). It is feared by demons always. They normally would not say It or want to hear It but they must submit to any command that is issued in His Name. The only exception is if they are given a command to say His Name as their sign of departure indicating that their power has been totally vanquished. I have ordered demons to say, “Jesus is Lord” as they depart from a person and go to the Foot of the Cross. It is also odious to them when believers speak the sacred Name respectfully or in a word of Scripture or some liturgical prayer. Above all, the Name of Jesus represents the authority of God over the power of evil, and they must obey the unworthy minister who wields it to cast them out.

Q: I’ve heard crazy stories about the types of things that happen in exorcisms: objects flying off of shelves, the possessed person levitating, etc. How often do you encounter things like that?

Not often. Most of the dramatic stuff you see is Hollywood’s presentation of exorcism, and of course Hollywood has a vested interest in dramatizing the encounters. The movie versions of exorcism all wildly exaggerate the power of the devil and the drama that takes place in an actual exorcism. I don’t deny that some of the exorcisms can be dramatic, but the vast majority of them are pretty banal.

Q: How, then, can you tell the difference between true possession and someone who is mentally ill, or perhaps just acting?

The exorcism ritual itself teaches us to look for three criteria as signs of true possession, although the list is not exhaustive:

One or more of these phenomena usually indicate a state of possession. Fully possessed people who exhibit these signs are fairly rare but they are out there. In the cases where these elements are displayed to a lesser extent, we work with professionals to determine how much of it has a natural origin and how much has a spiritual origin. We don’t automatically assume possession just because a person says he has a demon.

People with demonic problems usually have some woundedness or opening in their character to which a demon is attached and so it is completely possible that a demon and natural human problem can co-exist in the same person. For that reason, it is usually best for afflicted persons to undergo a two-track healing program of spiritual and psychological healing at the same time. That way both the human and spiritual dimensions are being addressed at the same time and healing takes place more quickly.

Q: So do you invite secular professionals to be part of the process?

Yes. Medical or psychiatric professionals can identify the medical dimension of a problem and help the exorcist to see the spiritual side of it more clearly. It is always better to work with medical professionals who have faith and who believe in the devil.

Q: You must be on the receiving end of a lot of spiritual attack. I’d imagine that it’s critical to the work that you do that you stay very strong in your faith. Do you have any tips for the rest of us?

The two most important things are to remain very humble, and to stay in a state of grace. The heart of humility is accountability — one must seek advice, seek counsel, and ultimately submit to the authority of the Church. Remaining in a state of grace is that spiritual armor that St. Paul talks about at the end of his Letter to the Ephesians. It’s critical to anyone’s life, especially in spiritual warfare.

I’ll post the second part of this interview later this week. If you would like to know more about this subject, I do highly recommend Fr. Euteneuer’s book. One of the things I like about it is that it is thorough without being too interesting: One problem with some books about dealing with evil is that they make it tempting to become fascinated with the more unusual aspects of dark forces — and, needless to say, it’s not a great idea to sit around and focus on evil. Fr. Euteneuer’s book thoroughly answers common questions in a straightforward way that is interesting yet doesn’t make the subject seem exotic or glamorous.

I hope you enjoyed this interview; the next part will be up in a few days. Thanks again to Fr. Euteneuer!

« A note about this week
Interview with an exorcist, Part II »