Interview with an exorcist, Part II 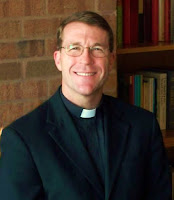 You asked, Fr. Thomas Euteneuer answers! Here’s Part II to our interview about exorcism and his new book, Exorcism and the Church Militant. (Part I is here.)

Q: You mentioned that secular professionals are sometimes involved in the exorcism process. What kind of reactions do you typically get from them? Do they think all this exorcism stuff is crazy, or do they agree that something supernatural is going on?

It is more accurate to say that secular professionals are involved in the consultation process but not usually in the exorcism sessions themselves. However, I have had psychologists involved in the prayer sessions, and they are always in admiration of the distinct and quite potent way that the Church has to heal people through ritualized prayer. This is spiritual healing, not psychological healing. They discover, sometimes to their amazement, that science doesn’t have all the answers or resources for healing the human person. When there is a demonic problem it will often block the individual’s psychological or medical healing, but after the person is liberated from his demons, the other types of healing are able to bear more fruit. By and large, any time I have had a psychologist join me in a prayer session they are awed by the power of God to heal a person at the core of his being.

On a related note, one other exorcist I know of invited a couple of (agnostic) journalists into a prayer session and they were just struck speechless with their inability to explain what was going on. Only faith can explain it fully. While the journalists did write about their encounter, the Church discourages any kind of publicity of such private matters, for the sake of privacy and the dignity of the person. In the case of priests who talk about this publicly like I do, it is important just to share information and stories that cannot be traced back to the individuals who are the subjects of the prayer sessions. It is done exclusively to build people’s faith.

Q: What about non-Catholics or non-Christians? Could a priest help them with demonic possession?

Yes. There is no prohibition to exorcising those who are not members of our faith or of no faith at all. In fact, if it is done correctly, an exorcism process can be a moment of evangelization for those who do not have explicit faith in Christ or the Catholic Church. Conversion to the Church is not a condition for receiving exorcism either. “What you have received freely, give freely, ” says the Lord, but every exorcism is a true witness to the power of Christ that operates through His Church.

Q: I’ve noticed that you tend to get an extremely negative reaction when you say that the Harry Potter books are dangerous. Some folks hear that and think, “I know a lot of people who read Harry Potter and remained strong in their faith, or have even been inspired by the message of good conquering darkness” — and, conversely, they don’t know anyone who has read these books and gotten involved in the occult, so it doesn’t ring true for them. What would you say to that?

I would encourage anyone who holds the beliefs mentioned above to read the articles by Michael O’Brien on Harry Potter and other occult phenomena. The best one is Harry Potter and the Paganization of Children’s Culture. He has recently come out with a book of a similar name. He holds that Harry Potter author J.K. Rowling writes out of a completely pagan worldview, and even though there may be some points of contact between paganism and Christianity (some basic notions of good and evil, for example), the totally pagan mindset of the Harry Potter 400-million-book-onslaught is what is dangerous.

The Harry Potter series will not make a person demon possessed; it will, rather, normalize the existence of demons and infuse the occult language and imagery that celebrates them into the minds of the young. It is absolutely not true to say that this stuff doesn’t get people involved in the occult. Go and look at the Harry Potter section in Barnes and Noble and see what occult and witchcraft phenomena this series has spawned for our youth.

It is also my contention that the vampire craze is a direct result of a decade of Harry. Pretty soon the Harry Potter generation, who are now a decade older, get bored with the childish “Hogwart School of Witchcraft and Wizardry” and spell casting, and they need a little more “mature” form of occult entertainment.

Q: What about other books that involve magic? A lot of people say, for example, that C.S. Lewis’ Chronicles of Narnia brought them closer to Jesus, even though the stories involve magic, spells, etc. What is your response to that?

Following from what I said above, I believe that the infiltration of pagan images and occult themes into the minds of our children has a devastating effect on them.

Tolkein’s and Lewis’s works come entirely out of a Christian worldview, despite the use of magic and some occult powers. In Lewis and Tolkein, the use of these preternatural powers is not ambiguous like it is in the Harry Potter series, and the figures who use them are either totally good and Christ-like (Gandalf, for example, becomes a Christ figure in his use of power to heal and protect people from evil) or they are totally evil and use power like demons do to harm and control (i.e., Saruman and Sauron).

Q: I read in your bio that you participated in the Marine Corps Officer Candidate Program in college, attended basic training at Quantico, Virginia and graduated at the top of your Company. Has this experience in the Maries helped you at all in your role as an exorcist?

It gave me a strong sense of the Church Militant — that still remains for me a defining image of how the Church should operate in confronting the evils of our day. I believe that if more Churchmen had a fighting spirit, the power of evil would not be so virulent in our culture. It is true to say that when the Church is weak, all of society is weak. By extension, when church leaders are weak the Church is much less able to be the conscience of society.

Q: You mention in the book that in some sense Satan and demons are disempowered now. Were demons more powerful before Jesus’ birth and death?

Very much so. There’s a great book by Fr. Jean Danielou, a Jesuit priest, called The Angels and Their Mission. He describes angels being sent into the world to try to lead men to God. However, because of the tendency of human nature to be corrupt, the demons won by leading men into idolatry, and only Christ could set it right. The power of Christ against evil has been delegated to the Church — he sent disciples out to heal the sick, preach the good news and cast out demons — but the Church needs to operate as the Church Militant in order to restrain the power of evil in the world. If it doesn’t, the power of evil grows.

Thanks again to Fr. Euteneuer for taking the time to chat with me! Again, if you’d like to learn more about this subject, I highly recommend his book, Exorcism and the Church Militant.