Prank calls and the power of humility 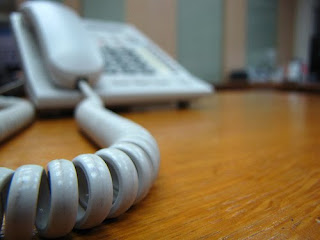 One evening in college some friends and I were sitting around in my dorm room, getting ready to head out to go to a party, when the phone rang. Caller ID showed that it was yet another telemarketer. Our number had been inundated with sales calls, and I was getting sick of it. We had some time to kill before we needed to leave, so I decided to have some fun with the telemarketer for my friends’ amusement.

I motioned for everyone to get quiet, clicked the speakerphone button, and answered the call. Immediately a middle-aged-sounding man began his pitch, announcing that he was with a local home services company and asking me leading questions about my carpet cleaning needs.

Doing a horrible imitation of an east Texas accent, I interrupted him to say, “I don’t believe in cleaning carpets.”

“Sir, that kind of thing is against my religion, ” I said in a lecturing voice. The idea came to me to play the role of a religious zealot, to see if I could get the telemarketer to be the first one to hang up if I launched into a hellfire and brimstone lecture about how carpet cleaners were from the devil. Boy, wouldn’t my friends think that was hilarious — me, the consummate atheist, playing the character of a religious nut!

A bit hesitantly, he said, “Well, I’d never heard of that. What is your religion, if you don’t mind my asking?”

“I’m a Christian, of course!” I replied, raising my voice with the first syllable the way religious girls on my college campus always did when they talked about their faith.

That one caught me off guard. I could not think of the name of a single church off the top of my head, so I stammered, “The, uhh, Church of the…Bible.”

“Ooooh, ” he gushed, “Is that Covenant Bible Fellowship out in Huntsville? With pastor Mike?”

“Why, yes, it is, ” I said. “Pastor Mike is just darlin’, isn’t he?” I was trying to get back to the hilarity of my planned lecture about the evils of carpet cleaning, but the telemarketer’s enthusiasm derailed me again.

“How long have you been a Christian, ma’am?” he asked, then quickly added, “I apologize for the personal question, but it’s just a topic near and dear to my heart.”

“Well, I, uhh, accepted the Lord into my heart, umm, ten years ago, ” I said, mimicking the types of things I’d always hear my born-again Christian classmates say. “I, uhh, walk with the Lord every day.”

I glanced at my friends. I felt my face getting red. This was not the triumphant wit-fest that I had planned when I answered the call.

“I’ve got to tell you, the Lord has just…” he paused, obviously getting choked up. “The Lord has just done so much for me. I was away from him for so many years…and I accepted him into my heart two years ago…and my life has just been taken places I could have never imagined.”

“Well, how lovely, ” I said. I scanned the room for the handset to the phone but couldn’t find it. We were stuck on speakerphone. Out of the corner of my eye I saw my friends shift uncomfortably in their seats.

“I’m sorry, ” he said as his voice cracked. “It’s just that my life was such a mess. I was an alcoholic. My marriage was practically over. I was so depressed. And the Lord…the Lord healed me, healed my marriage. I haven’t had a drink in twenty-five months and six days. I could have never imagined that my life could be this good again, and I’m just so grateful. You know what I mean?”

No longer feeling like such a comic genius, I abandoned the plan of playing the church lady role and just tried to get myself off the phone as soon as possible. I didn’t know what to say. This poor man didn’t know he was talking to a militant atheist, and that a bunch of her atheist friends were listening in. “Ah, yes…” I muttered.

“I’m sorry, ” he said again, “It’s just so good to meet people like you, to come across fellow Christians when you least expect it.”

I wanted to crawl under my bed and never come out.

“Listen, ” he continued, “Don’t you even worry about any of this stuff I was trying to sell you. That’s not what matters. I’ll let you go enjoy your evening. Could I just ask you to keep me in your prayers?”

“God bless you too, ” I stammered, forgetting to use my fake accent, and hung up the phone.

I turned to my friends; they were all silent. None of them were religious, most were atheists, and we never hesitated to ridicule Christians in our conversations. But this time nobody said anything. Seeing such a rare display of vulnerability and innocent sincerity had left us frozen, unsure of how to approach that kind of pure humility. In the silence that ensued it was clear that though he was the one who didn’t get the joke, it was I who was the fool.

Someone eventually forced an awkward chuckle, and someone else mumbled something about the call not going as planned, and we all got up to collect our things to go to the party. But before I left I glanced at the phone and thought of that man on the other end.

I thought of the warmth and love that had exuded from his voice, how he seemed to posses a level of hope and joy that somehow seemed both childlike and wise. It was something I did not see very often, but I always had a deep sense of wanting to experience more of it when I did. I thought of how he’d reached out to me as if I were a long-lost sister, how he’d assumed that I too had experienced something so sacred and so profound that it left you changed forever, feeling so overjoyed that you couldn’t help but share your elation with the world, even on telemarketing calls. “Do you know what I mean?” he had asked after telling me of how this God of his had taken a shattered mess of a life and restored it to something beautiful and whole. And as I closed my dorm room door, for a brief moment I wished more than anything that I did.