A friend of the Emperor 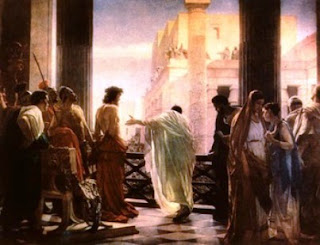 When I read the Bible for the first time a few years ago, I had a hard time getting into it. With little knowledge of Christianity and no knowledge of Judaism, I often felt a great distance between me and the events depicted on the wispy pages of this brand new book. Even the New Testament seemed very strange and foreign, and it would be a long time before I was able to feel a connection to even the figure of Christ himself. But there was one exception. One event described in all four of the Gospels jumped off the page to me in its vividness, because I felt a strong familiarity with one of the main people involved:

When Pilate came on the scene for the first time in the Gospel of Matthew, I sat up in bed and became transfixed by what I read. For some reason I found the scenes that involved him some of the most fascinating that I’d read yet, though I couldn’t put my finger on why. As I went on to read the accounts of his actions in the books of Mark, Luke and John, however, I came to the unsettling realization of why this person had so captured my interest:

Because he reminded me of me. More than anyone else in the Bible, I saw in him someone whose pattern of actions I recognized in an intimate way.

Of course I’d heard his name before and at least knew that he was somehow involved in Jesus’ crucifixion, but I’d always pictured him to be just “the bad guy, ” depicted as a flatly evil cardboard character. But as I read of his back and forths with the crowds, saw the hesitation in his words even 2, 000 years after they were spoken, I realized that he was a much different person than I’d imagined. I realized that the motives for his choices were complicated, disturbing…and familiar.

He knew what was right. He knew that this was an innocent man, and seemed to suspect that this might even be someone very special. But with the massive momentum of the crowd and his political future to consider, there was a lot of pressure to make the wrong decision. So what does someone like Pilate do when they stand in the face of some really alluring temptation to turn away from the right path? I knew it before I read it:

Pilate asked the crowd, “Which one of these two do you want me to set free for you?” (Matthew 27:21)

Pilate wanted to set him free, so he appealed to the crowd again… (Luke 23:20)

You test the water a few times. You keep flirting with the prospect of doing the right thing, hoping against hope that maybe this time it will be easy. And when you find that there is just no painless way to do what is good…

He took some water, washed his hands in front of the crowd, and said, “I am not responsible for the death of this man! This is your doing!” (Matthew 27:24)

You shift the blame. You make the discomfort of doing the wrong thing comfortable again by telling yourself that you are not wrong at all. You focus on your external circumstances, listening to the noise of the crowd instead of your own inner thoughts, pointing the finger always away from and never toward yourself.

But why? What is so alluring as to make a person act in such a dishonest, cowardly way?

He tried to find a way to set Jesus free. But the crowds shouted back, “If you set him free, that means that you are not the Emperor’s friend!” (John 19:12)

When I first got to this part, even though I had never read it before, I knew what was next:

I knew that the threat of losing favor with the Emperor would be more than a person like Pilate could take. I knew it would be the last straw, the spark to ignite the rationalizing and denial that would clear the way for proceeding with evil. I knew it because, at that moment, I recognized somewhere within myself my own disturbingly strong desire to be “friends with the Emperor.” My “Emperor” was something different than Pilate’s, of course: his was an actual man who had the power to make all Pilate’s wildest dreams of riches and success come true; mine was a symbolic Emperor comprised of all my desires for things like comfort and pleasure and money and control and success and acclaim, an Emperor whose friendship I sought over doing the right thing on at least a daily basis.

At the time this was all somewhat vague for me. Without the knowledge I would eventually gain through Christianity, I didn’t have a lexicon for articulating the reality of things like temptation and sin and redemption. But what I see so clearly now is that the story of Pontius Pilate’s decisions up there before the crowds resonated so deeply with me because it is the story of rationalizing sin. It is the story of trying desperately to make it comfortable to do what you know to be the right thing, and giving up when you can’t.

And, as I realized only later, Pilate’s all-to-familiar actions 2, 000 years ago are not as different in severity from mine as I might have liked to tell myself, because they both led directly to Jesus’ death on the Cross.