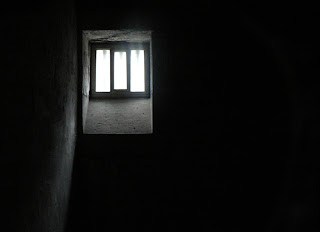 A couple weeks ago I was half paying attention to a documentary about a maximum security prison while folding laundry. They were interviewing a 25-year-old “lifer, ” and he mentioned that he used to be on death row but his sentence was commuted to life without parole. The producer asked him to describe what it was like to be released from death row.

He gazed into the distance and responded, “You can’t imagine. When you’re on death row, it’s like you’re already dead. You try to play cards, but you hear that clock ticking in your head, knowing that the date of your extinction has already been set, and now it’s just a matter of days and minutes. You could read a book, watch some TV, but why? You’re gonna die soon and can’t take none of that stuff with you, so it doesn’t really matter anyway.” He got choked up as he added, “I got my whole life back when I got off of death row.”

As I folded a t-shirt I nodded knowingly, subconsciously reacting to his description in a spirit of camaraderie. I instinctively viewed him as someone with whom I had a shared, rare experience, knowing that the producer and the viewers of the show could never imagine what it was like because they hadn’t been there like we had.

I stopped cold with a shirt half folded in my hand when I became aware of my reaction. Where did that come from? How on earth could I, a middle-class girl who’s never even been to the county jail, have the faintest idea what a former death row penitentiary inmate was talking about?

And then I realized: because when I was an atheist, I lived on death row.

I first realized the gravity of my sentence when I was around 11 years old. One night the thought of death randomly popped to mind, and for the first time I fully internalized the reality that I would one day die. Though of course I already knew that nobody lives forever, this was the first time that that veil that blocks unpleasant truths from our conciousness was pierced and I understood down to my bones that it was only a matter of time before a coffin lid closed on top of my body. The weight of that reality was too much for my intellect to bear; it’s like I thought about it more in my racing heart than in my head. My whole being was aware that everything I thought of as “me” — my body, my feelings, my loves, my thoughts, all my hopes and dreams — were nothing more than the products of random chemical reactions that would one day cease, and “I” would disappear.

The human psyche is surprisingly good at blocking out these sorts of unbearably heavy realizations, so I managed to get out of the tailspin of despair within a couple of days and not put any more serious thought into death for a few years. But then high school and college rolled around, I became more curious about life and the world, and the reality of death began to swirl around the periphery of my thoughts once again. Most of the time I could keep my mind occupied with school and friends and parties, but every now and then that veil would fall down again and the reality of death would go seeping down into my bones, leaving me too depressed to cry.

For some reason most of my other atheist friends didn’t seem to struggle with this sort of thing, but I didn’t understand why not. As atheist Bertrand Russell once pointed out, all the efforts of our lives were to be multiplied by zero in a matter of years. With no eternal “self” or even “memory” beyond the grave, it would be as if we never existed. Sure, we would live on in people’s memories, but all of humanity would one day be gone. And measuring by the universe’s timescale, all life on earth — let alone one human’s life — would not even amount to a blip on the radar screen.

The date of our extinction was coming up soon, getting closer by the second. The only difference between a death row inmate and anyone else, in my eyes, was that the prisoner knew the date. I had those same questions that inmate expressed: Why play cards? Why watch TV? Why read a book? Sure, you might have momentary pleasure or gain some knowledge, but it was all fleeting, and it would all disappear — along with you — upon your impending extermination. And the clock was ticking. We were all dead men walking.

It felt wrong — deeply, uncomfortably wrong — to think about all of this. And upon my conversion to Christianity I realized why:

That crushing despair I experienced when I would absorb the implications of my worldview was the feeling of a precious, eternal soul railing against the injustice of being denied. Somewhere in that part of my mind where primal truths too important for words reside was the knowledge that “I” was something more than just randomly evolved chemical reactions, that “I” was both body and eternal soul, that “I” had the opportunity to spend eternity in a place of perfect peace, and that to believe otherwise was the biggest mistake a person could ever make.

When I first came to believe the truth of Christian doctrine, I didn’t think much about the eternal implications. I’d gotten good at distracting myself from thoughts of death and I didn’t want to bias my research into Christianity with a desire to believe in eternal life. So it was only slowly, over time, that I became aware that I was freer than I used to be, that life seemed more complete in a certain way than it had been before. But I couldn’t quite put my finger on what it was.

Then one day I was driving through an intersection where the stoplights had just lost power, and I barely missed getting into a serious, possibly deadly, accident. It was then that I realized what that new “something” was: fear of death no longer haunted me. I no longer saw the end of my life on earth as an abyss of nothingness; rather, I understood it as an opportunity to finally go home. The sleepless nights, the frantic search for distractions, the restlessness that comes with seeking a constant state of denial were all gone. Though it had happened gradually, when I compared my new state of mind with my old one I felt lighter than air; the foundation of my subconscious was now paved with joy instead of despair.

In that moment I realized that I’d spent my whole life falsely condemned to death row. And now I was finally free.