Lies and Confession: The case of the stolen pacifier 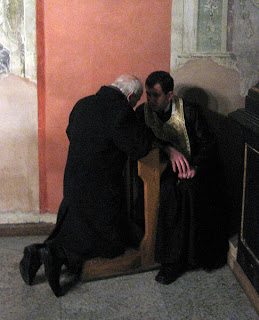 One day last year I was putting grocery bags in the car after an epic store trip, and after I grabbed the last bag something caught my eye in the back of the cart: a $3.75 package of pacifiers. Somehow we made it out of the store without paying for them.

I had all three kids strapped into the car, they were all overtired and on the brink of major meltdowns, the store was crowded with 10+ minute waits to check out, it was already well past dinner time, and some rumbling thunder indicated that it was about to rain. It seemed virtually impossible to go back into that store. But I really needed those pacifiers. My one-year-old lost her other one and wouldn’t sleep without it; they were the main thing I’d gone to the store to get.

As the weeks turned into months, the need to pay for the pacifiers felt less and less urgent. I told myself that I was definitely going to pay for them eventually, but it kept not happening.

An interesting thing happened in my prayer life as well: when I would repent of my sins during prayer, I never mentioned the un-paid-for pacifiers. Because, after all, I was going to pay for them. I just hadn’t gotten around to it. My mind had not categorized that as a sin. I didn’t “steal, ” I just “delayed payment.”

All of this fuzzy thinking suddenly got a whole lot clearer one afternoon, a couple months later, when I was preparing to go to Confession.

I was going over one of those Examination of Conscience aids and when I got to the questions related to the Seventh and Tenth Commandments, the pacifiers immediately came to mind. I imagined articulating to my priest all those excuses that had sounded so good in my head: “Well, Father, I didn’t steal anything. Although I do have these pacifiers at my house that were not paid for. But they’re just ‘on loan, ‘ because I’m going to pay for them!” 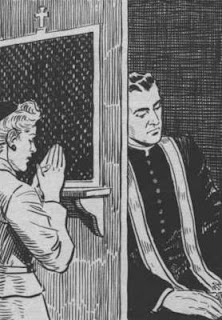 He would undoubtedly ask me how long ago I took these pacifiers from the store. And when I told him that it had been more than three months, it would suddenly be crystal clear what was going on: I had stolen them, and I was lying to myself about it.

It is an uncomfortable moment when the lies you tell yourself to excuse your sins are dragged out into the light and exposed for what they are. Knowing that I would have to explain my actions to another human being made me realize the uncomfortable truth: I had stolen. And, given the fact that three months had already passed without me making it right, it is unlikely that I would have ever remedied my actions, all the while telling myself that I hadn’t done anything wrong because one day I would make it right.

The discomfort of this newfound awareness of my sin motivated me to break through the morass of my laziness and lies and get down to the store to give them my $3.75.

As I recently discovered, evil always works through lies. I regularly confess my sins to God in private prayer, but when my confession remains within the safety of my own internal thoughts, it is fertile ground for lies to run wild. Too often my silent confessions to God tend toward mental meandering, bringing up only certain sins that are at the forefront of my mind, skipping over some of the older ones that lurk comfortably in the shadows. Too often the little stories I tell myself — “I’ll pay for it later” — sound pretty good when they’re fleeting thoughts in the shelter of my head, safe from the scrutiny of another human being.

But Confession drags my thoughts out of the shadows and forces me to examine my sins in the full light of day. Having a set place and time where I must account for all my sins since the last Confession remedies my all-too-convenient tendency to “forget” certain things. Having to codify my thoughts into spoken words brings clarity to all those amorphous ideas that ebb and flow in my brain. Having to go over my sins with another human being — to be questioned about my actions by someone whose voice is much less easy to ignore than the still, small voice of God — brings conviction and humility in a way that private prayer cannot for someone as spiritually immature as I am.

And, as I’ve said before, while the process of verbalizing my sins might be uncomfortable, being able to hear the words of God’s forgiveness that the priest says on behalf of Christ helps me know and feel God’s mercy. After seeing the power of Confession in my own life — in the case of the pacifier and so many others like it — I don’t need any theological book to know that this Sacrament is a gift from God.