Good drama, bad drama (and how to know the difference) 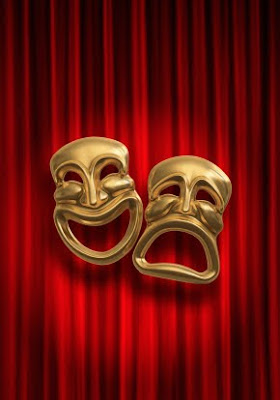 I recently finished the fascinating book The War of Art by bestselling author Steven Pressfield, which is a sort of field guide to spiritual warfare. He goes through practical tactics for defeating what he calls “Resistance, ” i.e. the malevolent force that works to prevent anything good from happening in the world (what a Christian might call “the devil” or “the enemy.”) In the section called Resistance and Self-Dramatization, Pressfield writes:

Creating soap opera in our lives is a symptom of Resistance…Sometimes entire families participate unconsciously in a culture of self-dramatization. The kids fuel the tanks, the grown-ups arm the phasers, the whole starship lurches from one spine-tingling episode to another. And the crew knows how to keep it going. If the level of drama drops below a certain threshold, someone jumps in to amp it up…It’s more fun than a movie. And it works: Nobody gets a damn thing done.

I laughed out loud when I read that, mainly because I realized that I’ve had my own Starship Resistance miniseries playing over here.

“I don’t even know why I bother to write at all!” I’d announce as I went to start work on the book or some other writing deadline. “I just can’t get the words out! It’s all a waste! THIS ENTIRE PROJECT IS DOOMED!” And, with that opener, I’d drag my friend/husband/babysitter/UPS delivery man into a tedious, belabored conversation about my life as a tortured writer (hoping that nobody notices my liberal use of the label “writer”) while my cursor sat motionless on the screen, not one new word appearing on the page.

I seem to be most prone to this kind of silliness when I’m doing anything that could remotely be considered “art, ” but no area of life is immune: whether it’s planning homeschool curricula or organizing the house or writing thank-you notes, I’ve realized that getting swept up in theatrics over minutia is one of the main ways I let Resistance keep me from getting anything done. (The internet is a particularly rich source of drama-based Resistance for me — anyone else think of the blogosphere in that Pressfield quote above?)

Not all “drama” is bad, of course. I love how the Christian life makes everything so exciting; how every day is a great battle, and the truths of the faith are better than the best fairy tale. It’s also normal and healthy to have strong reactions to intense events (in other words, don’t expect me to lay off the caps lock key next time I see a scorpion). And then there are things like clinical depression, where you may have stronger reactions to situations due to serious medical issues.

But there’s also just drama: baseless, time-wasting, Resistance-fueled caterwauling that you need to learn to shut down in order to live a full life. So how do you recognize it when you’ve fallen into it? I’ve been pondering that for the past couple of weeks, and what I’ve come up with is this:

I think the primary difference is that Resistance drama is ego-focused, whereas the healthy ups and downs of the spiritual life are God-focused. When I get mired in bad drama I withdraw into a tiny solar system with my blazing ego at the center, where I fixate on who said what that offended me, whether people will think what I’m doing is great or terrible, whether what I do is good or bad in comparison to other people’s work…and I give nothing back to the world. I’m a black hole. Paralyzed by Resistance. Whereas on the occasions that I’m swept up in positive drama, I’m more focused on God than myself, more concerned with helping people than comparing myself to them, and, most tellingly, I’m still creating. I’m still giving something back to the world.

Now that I’ve recognized this tendency, I’ve been getting a lot more done, especially in creative type endeavors. I’m learning to identify those moments when I’ve brought my life to a screeching standstill by turning it into another thrilling episode of Starship Resistance. It’s helped me to distinguish between when there are legitimate issues that I need to address, and when it’s time to shut up, stop the theatrics, and get to work.

CAVEAT: Even though Pressfield is not a Christian, as a Catholic I found 90% of The War of Art to be dead-on accurate and life-changingly, put-down-the-book-in-mid-sentence-and-go-tell-everyone-you-know-to-buy-a-copy good. Since it deals with spiritual matters it’s one you’ll want to read “with discernment, ” as they say, but I do strongly recommend it.

« A note about technical problems
Living an awesome story »